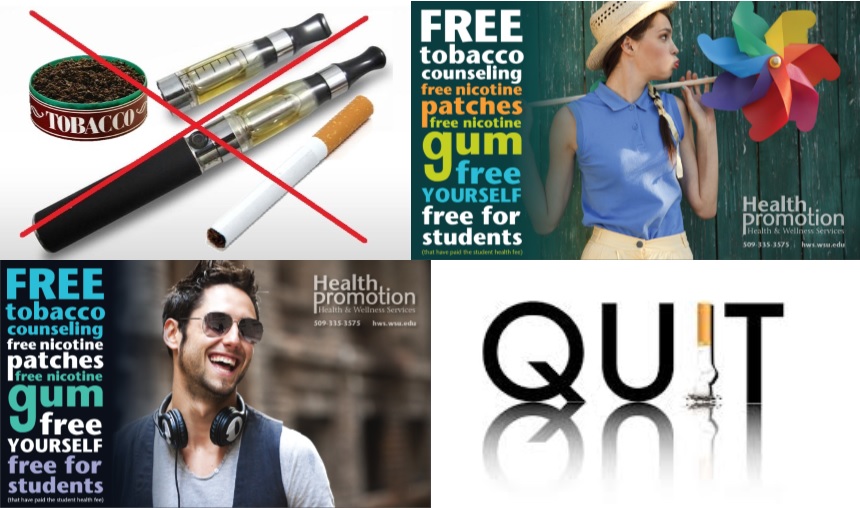 At their October 2015 meeting, the Washington State University Board of Regents adopted Washington Administrative Code (WAC) 504-38.  Based on this WAC, the WSU Safety Policies and Procedures Manual (SPPM) section 6.10 was updated.

FDA approved cessation products used in cessation programs such as patches, gum, nasal spray, inhalers, lozenges, and any other products containing nicotine used for research approved by the WSU Institutional Review Board, are allowed.  The following tobacco and nicotine products are prohibited: cigarettes, cigars, pipes, hookahs, all forms of smokeless tobacco, electronic cigarettes, clove cigarettes, and any other alternative products made primarily with tobacco or nicotine.
Improper disposal, including, spitting smokeless tobacco or discarding cigarette butts on the ground or out of a vehicle is also not permitted.

In the Spring of 2014, the ASWSU held a public forum, and voted to pass a referendum supporting a tobacco and nicotine free campus. President Elson S. Floyd then created a WSU Tobacco Free Advisory Task Force made up of students, faculty, and staff who researched how many other universities nationwide were tobacco-free. The Task Force determined there were more than 1,500 smoke-free campuses and more than 1,000 tobacco-free campuses. In addition to the undergraduate student referendum, surverys showed a majority of the graduate/professional students and employees wanted a tobacco and nicotine free WSU Pullman campus.

If you have questions or concerns, please contact your representative on the Tobacco Free Advisory Task Force.

Tobacco and Nicotine Use Safety Policies and Procedures Manual (SPPM) 6.10.